I promised quite a few people I would write a piece on my journey on the Camino when I came back. And I will.

But for now, I’ll leave you with a couple of photos as a taster and say emphatically that it was the best 250km I have ever walked. (Out of all the 250kms I’ve ever walked – I do it all the time.) It was a retreat for mind and soul – even if it did punish the rest of the body – and I couldn’t recommend taking this time out enough.

The beginning – leaving Astorga. A long road ahead, with scallops and yellow arrows as waymarks.

We were lucky enough to get to watch this sunrise from one of the highest points on the Camino – after a 5.30am start. 6am starts and 10pm curfews became the norm. Quite a departure for a night owl, but I loved it.

These kind of traffic jams, I can live with. 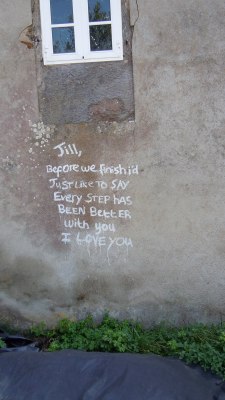 Love on the Camino…
(Mind you, if he’d written on the wall of my house like that, he’d be adding a few more blisters to his collection.)

Boy, were we glad to see this place.

The infamous Botafumeira. This giant incense burner was traditionally used to fumigate the Cathedral at the daily 12pm Mass. (Pilgrims are smelly). It’s now been redeployed in a new starring role as end-of-Mass entertainment (just when you think the fun parts are over) as it swings through the nave of the church, accompanied by super-dramatic organ music. Just Google it – I ain’t no fan of mass, but this was quite the spectacle. 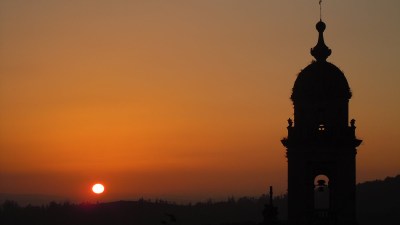 The sun goes down in Santiago de Compostela, on a rather perfect day.

Leave a Reply to An Cailin Rua Cancel reply