At the end of May, after sixteen years living away from my Mayo hometown, in search of a different pace of life and a greater sense of community, I decided to make the move back West. I wrote about it here in The Mayo News at the time.

I’m now seven weeks back on home soil, and can safely say that I haven’t (yet) questioned the decision. I feel consistently more happier, more relaxed and at ease and I treasure being close to my family again, and reconnecting with friends; spending real, unhurried time with them. Because I am in equal measures a firm believer that life is short and there to be lived, and a deluded optimist, I decided not to seek full-time employment for now and have remained  freelance in order to make the most of the west of Ireland summer. So far, that decision has ensured that I have spent lots of time outdoors on my own in the lashing rain.

But all in all, it’s been a surprisingly easy transition, though the adjustment process is ongoing.  Here are just seven things I’ve learned since returning west.

You can get around quickly

Getting around in the West of Ireland takes no time at all. This has been one of the unanticipated delights of the return west. One of the reasons I moved was because commuting cross-city every day was (literally) driving me out of my mind. Living in a small town means that I no longer view traffic lights as a target, and even taking into account the curiously high proportion of very slow drivers, I don’t behave like a deranged fishwife behind the wheel any more. (Much.) I am constantly marvelling about just how little time it takes to get anywhere. In my new blissed out state of mind, I have even found myself coasting along at 50km an hour on occasion, much to the chagrin of visiting D-reg Audi drivers. I also still sometimes manage to be late.

Weather envy does you no good at all

Moving west always came with the caveat of ‘more rain’, and the best way of dealing with it is just to bring a brolly and get on with it. However, in bygone days we didn’t have to cope with being reminded of this all the time on social media by our smug easterly counterparts. There is little so maddening as reading about the rest of the country’s woes as they collectively sweat in a heatwave, having to watch them Instagramming their 99s/pasty legs in surfing shorts while meanwhile, you are donning full waterproofs just to sprint to the car. However jealousy gets you nowhere, and I have consoled myself with the fact that I am saving a small fortune on Factor 40 while maintaining a pale and youthful visage. In your faces, you sunburned suckers.

Clew Bay, taken from Ben Gorm in the Nephin Beg range. In the rain, of course

Freelancing is fun … but challenging

While there are the obvious advantages of being your own boss such as calling the shots and managing your own time, there is also the uncertainty of not knowing whether you’ll be able to pay the rent in two or three months’ time. But freelancing involves (a) deciding what exactly you’re freelancing in (am I writing, researching, copywriting, social media managing, PR-ing or doing a combination of some or all of these?), and (b) packaging and promoting it; this is something I haven’t managed to do very well just yet, mainly both because I haven’t needed to and I’m still figuring it out. Just today two projects I had in the diary for August fell through for various reasons, so while it does mean I can now go on my holidays without a looming deadline, it also makes the prospect of further holidays look a bit bleaker. But them’s the breaks – and there’s nothing like the prospect of an overdraft to inspire some enterprising creativity.

There is no excuse for boredom

Even if you’re on a budget, I’ve found that here, there are shedloads of things to see and do. Before moving, I was advised by well-meaning friends to think carefully about returning due to the lack of “things” going on. While there’s no Camden Street nightlife and pulled pork eateries are fewer, I’m still a bit baffled; I’ve barely spent an evening sitting in since I got back. It’s festival season down here (and summer of course), so there are lots of local jollies, but apart from pursuing actual hobbies like running, hillwalking and cycling (there are over 40 sporting clubs of various types in this area alone) there are plenty of volunteer-led projects into which to throw yourself. Unless you’re actually sitting in your house watching paint dry, I can’t understand how anyone can ever be bored. And there is always something new and fascinating to learn about your home town if you’re interested in looking. Failing that, you can always take up knitting.

While there’s lots of evidence of a strong community spirit – something I missed for a long time, away from home – local involvement also comes with its own politics, sensitivities and dare I say it, egos. It’s been interesting to remember just how easily offended people can be if you don’t explicitly acknowledge their individual contributions, or if you question their established ways of doing things, and sometimes bearing this in mind from the outset can help to keep the waters smooth. Likewise, easing your way gently into a new group is the way to go – tenure can result in territorial tensions. Diplomacy  – treading carefully but confidently – is a skill in itself.  What can I say? I’m always learning.

Football is a religion

Yeah, we all knew that already. Now I just get to worship inside the church all the time. Watch out Sam, we’re comin’ to get you. Yes, this is our year.

Of course, I am completely, unashamedly biased, and this is not a learning, rather a reminder. I wake most mornings feeling lucky to live in such a gorgeous part of the world.  I’m torn between wanting to tell the world about it and share its stunning secrets, and keep it all to ourselves. But sharing is caring, right? Even in the rain I think it’s beautiful (though I may be in a minority there) and a walk on a deserted beach in the wind and the rain oddly never fails to make me feel alive. And at this rate, we might even get another sunny day before September. 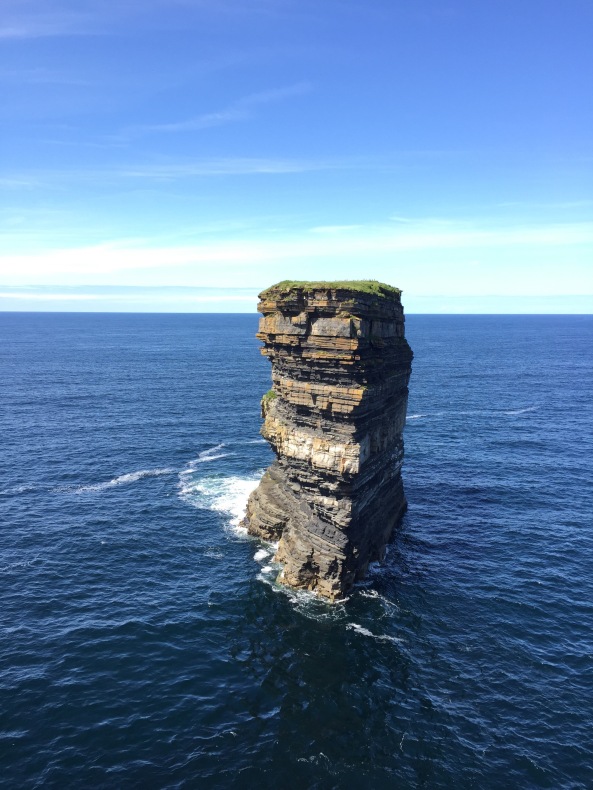 Legend has it that a pagan chieftain, Crom Dubh attempted to burn St. Patrick to death, but our Paddy was having none of it. Crom Dubh, seeing that he had met his match hid in his fort, but Patrick hit the ground with his crozier breaking it and leaving the fort – known as Dun Briste – isolated from the mainland. Crom Dubh was eaten to death by midges, something that will come as no surprise to anyone who has spent a day working in the bog in Mayo.

Service with a smile … it works both ways

With a month of country living under my belt after the move back west (God, it’s great to be home), the boxes are finally unpacked and I’m readjusting to the easier pace of life in the homeland. There’s plenty to love, but a constant source of joy is just how little time it takes to get from A to B. Because Dublin has approximately 94 sets of traffic lights per kilometre, sometimes the drive to pick up a litre of milk and a few spuds entails more braking than driving. Here, you just turn the key in the ignition and you’re there. Dorothy and her red slippers ain’t got nothing on life in Mayo.

It also strikes me daily how much friendlier people are. That’s part of our charm, but importantly, in a region depending so heavily on tourism, it’s also an essential business attribute. Hand in hand with that comes good customer service, which, it’s fair to say, is probably the norm. That’s why, when confronted with a bad experience, it jars all the more. But while the majority of encounters are positive, if truth be told, we could still sometimes do better.

As a customer, when you go to the shop to buy a litre of milk, or to buy a stamp in the post office, what are your expectations of that experience? Do you like to be greeted with a hello, some eye contact, a chat? Do you prefer to be handed your change, rather than it being slapped on the counter? Entering a clothes shop, do you expect a friendly greeting and an offer of help? On your weekly shop, do you prefer it when the cashier talks to you, not their colleagues? Most of all, is a smile important? Most of us would probably agree that these are the most basic tenets of customer service. Having someone go the extra mile thereafter is just the icing on the cake.

When the basics aren’t met, there is a knock-on effect. Chances are, if your experience in a shop is an unfriendly, unhelpful one, you’ll bring your money elsewhere next time. As a local, if you experience poor service in a restaurant or café, you’ll probably tell ten people about it. As a tourist, add TripAdvisor into the mix and tack on a few zeros. Poor service and lack of warmth in a business make for a poor tourist experience, and colour their entire impression of an area. Meanwhile, among locals it discourages loyalty. And whoever deals with customers is the face of that business, regardless of the name over the door. If that face is a scowling one, you’re onto a loser from the start. Little things, big implications.

There are, of course, two sides to every argument. Working in the service industry and dealing with the public can be no picnic, and years of retail management in a past life taught me that contrary to popular belief, the customer is most definitely not always right. On the contrary, they can be rude, confrontational and frequently downright mad. Working in fashion exposed me to all sorts, from the “I know my rights” brigade (they generally don’t) to those who think it appropriate to use your fitting rooms for their bodily functions (yes, even that one). Once, I went home with a black eye, the result of a shoe thrown at me by a gentleman I can only describe as being overexcited. So there is little doubt that facing the public on a daily basis can bring its challenges. If you’ve just been eaten alive by an irate customer, it can be hard to plaster on a smile to greet the next one. 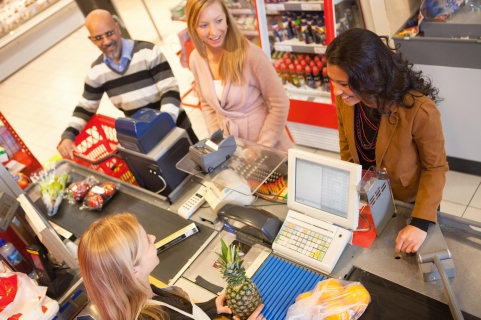 But good service is essential for business to thrive and survive. Taking pride in your business will garner respect from your customers, and not just in the hospitality industry. Visiting tourists become part of our landscape for a while, using our supermarkets, our filling stations, our corner shops. Their experiences help to build their impressions of our county, as well as building our economy. And for those of us at home, service with a smile can brighten the day. But remember, it works both ways!

This was originally printed in The Mayo News on 15th July 2015.