So, as a follow-on from my last post, a quick update on my alcohol abstinence resolution. I deliberately haven’t started another blog with Hello Sunday Morning as I find it difficult enough to update this one regularly. Three weeks in, how’s it going?

Firstly, I had no idea I was quite so fond of red wine. But for the last three weeks, I find it occupying more of my thoughts than is probably healthy. It doesn’t help that we are major fans of it here and the wine rack is consequently a constant reminder.. As I predicted, what I really miss the most is that lovely single glass of wine of an odd evening, but I suppose that’s just shown me how much it’s become a habit, unbeknownst to myself.

What’s come as more of a surprise however, having never abstained from alcohol for any meaningful period before, is the realisation of how much I have come to rely on it over the past 15-odd years as a social lubricant. On certain occasions, at least. Take the following example. I attended a wedding last week, at which I knew barely anyone. From start to finish, I tried hard to get stuck in and enjoy it, but wow, despite the happiness in the air, the beauty of the bride, the deliciousness of the food, it was a  struggle. To the extent that it actually felt like an ordeal. The company was decent, but I felt like I’d become socially stunted overnight – like I’d lost my personality. I stood at the bar ordering soft drinks a few times, and on each occasion had to stop myself from ordering a (very strong) alcoholic beverage. There were other factors at play, admittedly, including feeling lethargic and unwell, but it was downright painful, and ultimately a bit pointless. I felt bad about myself and my apparent inability to relax without alcohol. It was undoubtedly the single biggest test I’m likely to face during this period, but it served a purpose as part of this “reflective” journey, so not entirely in vain.

On the other hand, I’ve spent a few evenings in the company of good friends lately, surrounded by food and alcohol. On one occasion, dinner with a group of girlfriends I wasn’t alone in abstaining, but others had the usual reasons like pregnancy and cars. That was grand – no hardship involved. The second, an evening gathering in a friend’s house where I was the only one abstaining. I expected that to be difficult, particularly as I arrived a little late to the party. On the contrary, I had one of the best evenings I’ve had in months. Laughed til there were tears in my eyes, didn’t feel in any way out of place and I even managed to stay out til 5am. No difficulty at all (apart from the lemonade-induced sugar high).  It felt really refreshing to be part of a group who didn’t question me or force the issue when I wasn’t drinking. I didn’t feel in any way that my not partaking set me apart from the conversation and neither did I feel that my being sober made them feel ill at ease. (At least I hope not!)

The drawback to staying out til 5am on a Saturday night is that Sunday morning slips away from you. I woke up at 8.30am with the beginnings of a migraine I’d staved off the day before, so I put my head under the pillow and the day didn’t see me until noon had passed. Then there was GAA on d’telly.  So I kinda failed at being wonderfully active and reclaiming my Sunday morning (armchair sports don’t count, apparently). Still, you can’t win ’em all.

So. Do I feel any better for not drinking? Em, honestly, no. Not in the slightest.

I’m a bit disappointed – I thought I’d feel happier, healthier, clearer of mind, but to be fair, I have to look hard at myself and admit that other aspects of my lifestyle at the moment are probably counter-productive. I’m still not working, so my routine has started to slip recently, my sleep pattern is all over the place, my motivation levels are low, and not having had an income since Christmas has imposed its own restrictions and pressures. This year so far has been full of emotional upheaval and uncertainty, but to my great excitement, I’m starting a new role this week with an organisation I’m thrilled to be working with. I’m looking forward to the challenge and to feeling a little less at sea once I bed in. Not to mention, feeling a bit more useful to society.

So, three weeks in, what have I learned? Well, I’ve discovered that I really like red wine, that you think about things like red wine a lot more when you know you can’t have them, and that being at ease in social situations probably depends a lot more on the people you’re with than the amount of alcohol you’re consuming. All in all, not exactly groundbreaking revelations, but part of a personal journey that so far I’m ultimately glad I’ve undertaken.

Also, having the willpower of an amnesiac squirrel on a regular basis, I’ve surprised myself by discovering some reserves of stubbornness, and I know I will see this through. In what is probably the more surprising of progress updates, I have also managed to stay away from crisps. (Even when no-one can see me.) And there is also the bonus of feeling infinitely superior to an undisclosed number of our elected political representatives, in that I managed to stay sober on Prom Night. 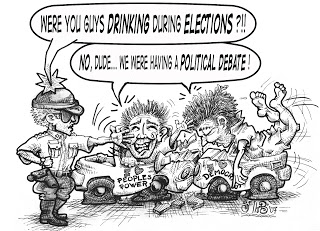 (Image by Sethness on DeviantArt)

So here’s to the next month. I’d love to know how feel HSMers are getting on, or how anyone who’s been through this process before deals with those difficult social situations – so feel free to leave a comment below with some wise words. I’ll repay you in 2007 Marquis de Rascale (my housemate’s).