It’s May, a new summer season is upon us (apparently), and around us a new conversation is finding its feet. Discussion of mental health issues and suicide, in particular, has never been more prominent than in recent times, yet rarely has the conversation been so intense and the messages been more mixed.

We’ve had weeks of robust debate around abortion, where the term ‘suicide’ has been bandied around frequently, carelessly. Public discussion is hugely important in shaping perceptions of mental health, and regardless of the abortion issue, suggestions of large teams of professionals having to ‘verify’ the state of mind of a suicidal pregnant woman arguably sent a subtle, but potentially very damaging message.

We’ve witnessed also the late Donal Walsh’s impassioned campaign against suicide. At 16, Donal knew he was dying, and spoke eloquently of his anger that some of his peers were choosing to end their lives, when he so badly wanted to live. There is little doubt that Donal’s brave handling of his illness earned him respect and admiration. While he may not have fully acknowledged the mindset that drives someone to take their own life, nevertheless if his sentiment, ‘suicide is a permanent solution to a temporary problem’ resonated with just one young person and made them think twice, then it hit the mark.

Another to add his voice to the discussion has been musician Niall Breslin, who’s spoken candidly about the crippling panic attacks he suffered for years. The significance of someone like Bressie – likeable and popular among the younger, more vulnerable demographic – talking openly  about his own mental health simply cannot be underestimated.  He is also an active campaigner who insists that suicide should just not be an option; it “should not even be part of the conversation”.  Instead, he focuses on the practical, and is adamant that young people need to know exactly where to turn. While there are many options, he says, quite correctly that they are not always clear or obvious, and they need to be so. Bressie has also highlighted the negative effects of excessive alcohol consumption – something that for various reasons is routinely ignored in mental health discussions but undoubtedly contributes in no small way to the problem.

What’s great about Bressie’s input is not just the way he normalises mental health, but his reassurance that mental ill-health is treatable, and that we have the power to make positive changes. Too often these conversations focus on negative outcomes like suicide, but it’s vital to show that frequently outcomes are positive, people do recover and that we can and should take steps to mind our minds like we do our bodies.

Last Saturday, the spectacularly poignant Pieta House Darkness into Light walk saw 40,000 people in parks nationwide rising before dawn, donning yellow t-shirts and walking together towards the sunrise in a powerful show of solidarity, remembrance, and hope. The emotion was palpable – unsurprising considering that pretty much every participant had in some way been touched by suicide. All were walking to send a powerful message that change is needed, and quickly.

May is Green Ribbon month. Like pink ribbons are synonymous with breast cancer, the green ribbon is an international symbol – of challenging the stigma of mental health problems. See Change, the National Stigma Reduction Partnership has launched a month-long campaign to get people talking openly.

We are however, already doing that, and often the advice given to those who are struggling is to “talk”. What we don’t acknowledge is that often, starting conversations is the hardest part, and that many of us simply don’t know how. Even harder is knowing how to listen, without necessarily offering solutions which may not be helpful. The Green Ribbon campaign offers helpful, practical tips. Simple things. Ask someone how they are. Don’t feel the need to jump in with a solution – just listen. Be patient. Sometimes, tiny things like a text message make the biggest difference.

Above all, we must realise that collectively we all have responsibility. An act of kindness costs nothing, while simply looking out for those around you can be priceless. This is the season of hope. Let’s make it a mission to spread some light this May. And get talking. 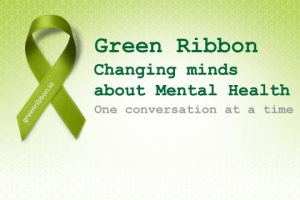 Published on Newstalk.ie on Friday 17th May 2013